Meet The Man & The Company Behind The Machine 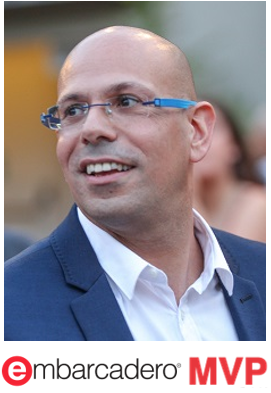 Talk To The Expert

Oren Aviram is a Delphi Fan. This on top his vast knowledge & experience. he is a true software expert professional, with vast knowledge and experience of over 30 years in the IT industry, providing software solutions, specializing in migration & maintenance of large scale software Legacy systems based on a variety of technologies (Delphi with BDE, Java, VB, C# .Net using legacy databases like Paradox, dBase, Interbase, Access, Oracle with Natural, Sybase 12.5 etc.)

Being a Migration Expert is a Tough Business, where you have to master past, present & future technologies, lead a cross company solution, get along with employees as well as with the employers, be sensitive to client’s needs, flexible as an acrobat, as well as to being a Guru, a Teacher, a Doctor, Psychologist & a Social Worker…and of course a Miracle Worker.

PACIFITY Technologies lead by Mr. Aviram & its team of experts along with the cooperation & guidance from Embarcadero technologies makes the impossible very possible. With each & every migration project we have had the honor to take part in, we have learned something new & understood it a bit more. Over the years we have developed many tools, specifically for each project, in order to provide better solutions, quicker, easier, and maintainable software products. These tools helped our customers achieve better performance & leap their legacy software into the future.

About The Delphi Parser & Delphi Language

The Delphi Parser, is a technology that is able to automatically read a large scale source code millions of lines of code in thousands of files, scan it, map it, identify objects, link between Modules, Objects and Forms, DB Scheme & the actual code, and based on given rules, replace the old code with a new one. The Delphi Parser is a rule based technology, specially designed to be customized according to each clients’ needs, and migrate millions lines of code, quickly & easily, pain-free, with no human errors, better than any development team can do. The Delphi Parser can reach the line of code and make any kind of change – add, remove or modify the code. The Delphi Parser also knows how to connect to the database, read queries & data schemas tables & stored procedures, and to make changes in the components of the database code itself, and update existing hard coded SQL queries code, if needed. Today, most of the activity is done in DELPHI, where it all began. Soon, it will be available also for – C #, VB, Java.

DELPHI is the software development language for Windows systems, based on Pascal, much like as a development language like Java, C#, Visual Basic. DELPHI was crowned in the mid-90s, for the best Rapid IDE to build application for with of Windows 95. DELPHI under Borland, was the first to give a proper solution, quick and easy development of software in the Windows environment (as opposed to Visual Studio Microsoft’s MFC)

The DELPHI with C ++ Builder allowing legacy systems from the 70-80, to bridge the gap and cross over from DOS or MF systems, towards Windows systems. Delphi made it possible, because it could communicate with legacy systems, and databases as old as Paradox, dBase while working with ORACLE, MS-SQL and others. Today in 2022, with the newest Windows 10 & 11 systems, 64Bit and Unicode, there is a market demand for new and upgraded applications, and growing need to migrate the old systems, from the 90s, and those still working on ’70s technology to the future, while providing new capabilities and enable the utilization of innovative technology, and working under new operating systems.

The Uniqueness of the Delphi Parser technology is that it is constructed in the form of open layers, allows any programmer access to all its functions and make the adjustments at will – open version can also access the source code, which is written in Delphi. The first layer deals with the Core Language functionality. The 2nd deals with Database Component, that handles simple replacement requests. The third layer already contains the functions of scanning processes of the Code, over a single file, across the entire libraries, and complete projects. The layer above knows how to scan the whole project for similar requests. All this is done with the understanding that there is compatibility between the millions of lines of code that exist within the organization, and there is great compatibility between different projects in a written code. The similarity between the code found between different customer brought me to the conclusion that you can combine all the technology tools that will enable many more customers to enjoy this tool very easily, while reducing workload by 80% during the upgrade process of the code, as well as significantly reducing upgrade costs by a factor of 10.

The tool can be adapted to different forms of writing, whether in the same project and whether for different customers. After analysis and mapping patterns of development and use of components of any project, you can build a custom upgrade process, and tailor a solution for every customer requirement to carry out its automatic substitution. With the Delphi Parser you can get an accuracy of 95%, with no mistakes or errors. However, it is noteworthy that automatically replace also requires subsequent manual corrections and changes before it can compile & executed, and of course strict quality check is required. But these tasks are clear and well known, capable of being implemented in an orderly and structured. Running a Full Automatic Process of millions of lines of code, takes no more than a few hours. The replacement can be made automatically, efficiently, safely, using a separated virtual environment, without any human bugs & mistakes. The process does not interrupt the ongoing development, with no need to merge code or branch. Due to the nature of the automatic process, there is no need for code freezing, or creating a separate team to handle the migration project, and without any risk of harming the development process or business continuity.

The migration process progress in rounds, like Agile. Short rounds of automatic changes, then manual corrections, compiling, testing – and repeat, for repairs and modifications of the parser, and running repeats until one obtains a proper use, if not perfect. Typically, migration process can begin in the evening with a fresh backup copy of today checked-in work, upon completion of the daily work. In the morning, with the coffee, the new migrated code will be ready for testing. By evening it will be ready again after repairs and modifications for further testing – all without interrupting the ongoing development team. The Delphi Parser automatic migration process saves up to %80 of manually migration costs, and makes it 10 times faster. Manually migrating millions of lines of code, takes about few years with an entire team of developers. The cost is measured at the lines of code, scaled between $5 to $20 per line of code (depending on code complexity). Typical a project is estimated for about several million dollars. By using our technology, we can reduce costs by 80%, and shorten the time to 10 times. Average cost for automatic migration is about hundreds of thousands of dollars (instead of millions), and a few months (instead of years), without allocating special team force, and without the interference to the product ongoing development & without any risk to the company.

We'd Love To Hear From You!

Fill out the form and our team will be in touch with you promptly. Thank you for your interest!

Page load link
We use cookies on our website to give you the most relevant experience by remembering your preferences and repeat visits. By clicking “Accept”, you consent to the use of ALL the cookies.
Cookie settingsACCEPT
Manage consent

This website uses cookies to improve your experience while you navigate through the website. Out of these, the cookies that are categorized as necessary are stored on your browser as they are essential for the working of basic functionalities of the website. We also use third-party cookies that help us analyze and understand how you use this website. These cookies will be stored in your browser only with your consent. You also have the option to opt-out of these cookies. But opting out of some of these cookies may affect your browsing experience.
Necessary Always Enabled
Necessary cookies are absolutely essential for the website to function properly. These cookies ensure basic functionalities and security features of the website, anonymously.
Functional
Functional cookies help to perform certain functionalities like sharing the content of the website on social media platforms, collect feedbacks, and other third-party features.
Performance
Performance cookies are used to understand and analyze the key performance indexes of the website which helps in delivering a better user experience for the visitors.
Analytics
Analytical cookies are used to understand how visitors interact with the website. These cookies help provide information on metrics the number of visitors, bounce rate, traffic source, etc.
Advertisement
Advertisement cookies are used to provide visitors with relevant ads and marketing campaigns. These cookies track visitors across websites and collect information to provide customized ads.
Others
Other uncategorized cookies are those that are being analyzed and have not been classified into a category as yet.
SAVE & ACCEPT
SSL Certificates
Go to Top