“Legacy” is not a dirty word, it means “Successful”

Legacy software runs companies, and cannot simply be waved away with a magic wand. Whatever the legacy software does must be preserved. Legacy systems are successful and therefore mature, and likely have been in existence for a long period of time. A consequence is that legacy software is built using technologies available at the time it was constructed, as opposed to the most modern software technologies. Older technologies are more difficult to maintain, and this is a key point of pain for many legacy system owners.

Borland Delphi 2 to 7, are respectfully entitled to be called “Legacy”, as worldwide huge IT system are still running on them. serving millions of customers – if not Billions. Borland Delphi started early in the 1995, based on Pascal language, and most of the development based on Borland Delphi version 2 to 7, although written in the late 1990’s are still amazingly survived through the vast technology changes in the past 25 years, as the world shift to a digital era.

Delphi code is spread all over the globe, in every industry: Hi-Tech, Retail, Finance, Government, Military & Defense systems, Education, Agriculture and many more. Therefore, it is no surprise, why in those golden days of the new millennium, all the major companies & organizations that wanted rapid database application solution for Windows chose Delphi, and still do.

Replacing the All Mighty BDE with FIREDAC

Embarcadero’s FireDAC Data-Access Control, is the replacement of the all mighty Borlands BDE. It was build to replace the BDE, on the same class structure, with the same look & feel, but with a super-intelligent data access engine, ever made!

FireDAC, as well as BDE, are 100% pure Delphi technology. They were build to serve Delphi applications, unlike Microsoft ADO, or JDBC that are made to serve Microsoft & Java based application, respectively.

The Glory Days of the Delphi & BDE

What made the Delphi in those glory days of the 1990’s, the best development tool of that time, was the BDE – the Borland Database Engine. Back then, in the early days of the Internet & Windows 95, the ability to develop Windows form application with ClientServer architecture in minutes, quickly perform database queries & show them on a grid, was something that no MFC, Visual C++, Visual Basic or Java IDE can provide, and to the non-Delphi developer it was practically impossible, or presumed as a very hard & dirty job.

From 1995 until 1999, at the dawn of the Internet, as the whole world shifted from DOS to Windows XP, the BDE was also the only driver who knew how to connect to Paradox, dBase & legacy Oracle, the pre-historic Databases from DOS & Mainframes and to bridge the gap from the 1970-80’s legacy systems made in the with those green terminals – as the above photo, to the new & cutting edge technology of late 1990’s with Windows Forms & Event based 32bit application.

Upgrading legacy Delphi IT systems & upgrading to latest Emabarcadero’s Delphi 10.4 with FireDAC to support all the latest technology is made easy thanks to the Delphi Parser – Automatic Migration tools.

Legacy Delphi Modernization is a Must

In an ever changing world, in 2020, as the world changes yet again, while struggling with the Corona virus pandemic & governments are facing an economic crisis – it is clear to everyone that legacy IT systems resilience & connectivity has become a life-saving necessity, rather then a wish-full-thinking. It is high time to modernize these Borland Delphi IT systems, before it’s too late.

Back To The Future – with Embarcadero’s RAD Studio 10.4 Sydney!

It’s about time to move forward, back to the future, where Delphi was the holy grail of Software Development. Once again, it’s time to move on & upgrade those legacy Delphi based systems to support Multi Platformed Operating Systems, Clouds Mobile & IoT technology with the new release of RAD Studio 10.4 Sydney.

As in past few years, it became very urgent to migrate the old code, since the BDE is no longer supported & Microsoft declared a war on its own users, that still use Windows XP, and won’t move on to Windows 7 or Windows 10.

Moreover, nowadays, since everyone wants to upgrade to 64 bits Operating Systems like Windows 7 or Windows 10, old Delphi users faces migration for the first time, whereas the rest of the world have been battling to survive for more than a decade, with every version of MS Visual Studio .Net or Java. Furthermore, although many businesses wishes to cross over to Linux or OSX while migrating out of Delphi to C# .NET or Java – it doesn’t happen & all those endeavours most likely to fail.

In 2020, Embarcadero claims to have 6 Million users.

According to Gartner, in 2008 there were 2 Million Delphi developers, and its population keep growing. The Delphi and C++Builder developers community is much more stable than people think. They stayed devoted to Delphi even though Borland was long gone & sold to Microsoft (in which gave birth to C#) , and is now being revived by the mass effort of Embarcadero’s development team. The exact amount of Delphi based companies is unknown, and is estimated about 100,000 software related companies worldwide using Delphi are in need of migration process, but reluctant to do it, or knows how to.

Gartner estimates the cost of a manual total migration of huge legacy system, in any language, values at 5$ per line of code, going up to millions, where it is almost impossible, too risky & affordable.

An automatic re-coding process, reduces the cost hiring special team force for many years to come, by millions of dollars. A typical must have update of legacy Delphi code base from BDE to FireDAC spreading of about a 1 Million lines of code, if done manually – would take 3 years, and over 1 Million US Dollars. Using the Delphi Parser, you can do it yourself by automatically migrate your code, compile & run it within 3 months, with a budget of about $50,000. Saving up to 95% of the development work force.

No Fear. No Magic.

Seriously, anyone can use the Delphi Parser to migrate code or even to improve its quality by searching the code for black holes in its darkest corners. Using the Delphi Parser there is no need to plan a huge project, most of the work is getting done automatically by the Delphi Parser. It can transform an old existing code, spread in lots of files & directories, with millions of code lines, tons of objects, and produces a new & upgraded code, overnight!

Furthermore, there is the DIY (Do It Yourself ) Approach – Migration process is a delicate issue, and companies, like normal human beings, doesn’t like to take their dirty laundry outside. We understand this demand very well, and for that very reason we are able to provide the Delphi Parser tool with all the source code, knowledge & support, to do it yourself. In that way the development team can do it themselves.

The AI Rule Based Engine, currently suited for Delphi & C++ Builder, can easily be customized for all types of language code, data-scheme & other given technology. The rules can be defined, refined & redefined for the parser & scripts, as required. The parser is a set of smart functions that takes the notorious “Find & Replace” & the infamous “Cut & Paste”, lock them behind bars & throw away the key. This parser is nothing like these! It does the job, like nobody or no other tool ever did it before, with no loose ends or cutting corners. Based on all the data the Parser collects from scanning the project & analyzing it, it makes the changes wisely, based on set of rules and instructions. It doesn’t make any blind copies nor using half-baked data, voodoo programming, wild guesses or intuitions.

The Delphi Parser Code Analyzer is a very powerful tool that can scan a complete Delphi code base project against all available Delphi’s class libraries source code, such as the Delphi’s system units & libraries, 3rd party libraries & the code base’s own proprietary units & class. The automatic process can scan millions of lines of code, checks for references and marks all references of unit declaration made within the Pascal code base files.

The Delphi Parser Code Analyzer is the project manager’s new best-friend! It helps development teams to get a control over the code & maintain a cleaned & optimized project’s code base as part of the development life-cycle (unlike the Delphi Parser Migration Wizard that is a one-time tool within a migration project). It is a very powerful tool to be used within the development life cycle whenever you wish to release a new version or update, and you want to remove unnecessary files & libraries from code before it is deployed. 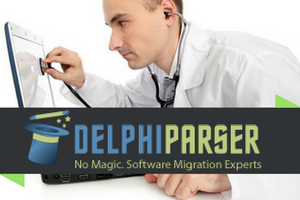 The Delphi Parser Code Optimizer helps in removing unnecessary “uses” units. We all know that the Delphi IDE loves to add units to the uses clause, whenever we add a new component, although in the end most of them are not really needed – but they stay there. Every software project contains many libraries & components that might become unnecessary or obsolete over the development process & stay there untouched, because no one really knows what to do with them & the fear of taking them out – leaves them there for eternity. Now, thanks yo the Delphi Parser Analyzer you can easily scan the code & see what is being used & what is not. The Delphi Parser Optimizer wizard does the same analysis procedure, but instead of showing an on-screen report it removes the unused “uses” references from your code, giving you a cleaned & optimized code as a result.

Using the Delphi Parser Automatic Migration Tools you can easily analyze your code on any given Delphi version & upgrade your legacy Borland Delphi to the newest RAD Studio 10.4 Sydney – and make your legacy Delphi code – A Legend, once again.